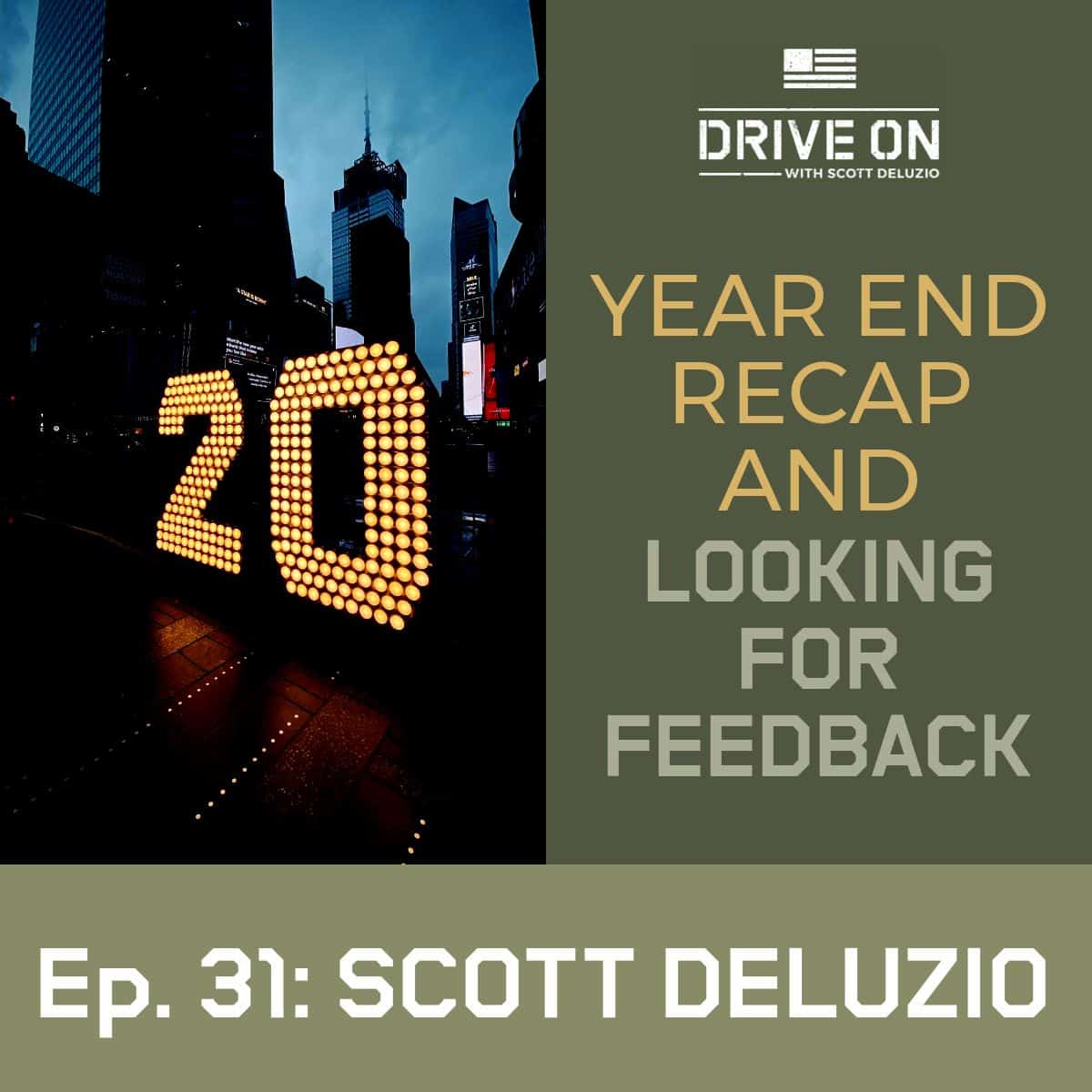 Drive On Podcast
Year End Recap and Looking for Feedback

In this year end recap episode, I'm reflecting back on some episodes that I thought had some really impactful messages.

In the new year, I want to be sure that I'm putting out content that is useful to the listeners of this show as well.

Episodes referenced in the show:

Thanks for tuning in to the Drive On Podcast where we talk about issues affecting veterans after they get out of the military.
Before we get started, I’d like to ask for a favor. If you haven’t done so already, please rate and review the show on Apple Podcasts. If you’ve already done that, thank you! These ratings help the show get discovered, so it can reach a wider audience. While you’re there, click the subscribe button so that you get notified of new episodes as soon as they come out. If you don’t use Apple Podcasts, you can visit driveonpodcast.com/subscribe to find other ways of subscribing including our email list.

I’m your host, Scott DeLuzio. And now, let’s get on with the show.

Alright, it's December 31, New Year's Eve. It's pretty cool how this year I ended up being able to do a year end recap episode on the actual last day of the year. Well to be perfectly honest, I recorded this episode last week so it isn't truly a year end recap, but whatever it's close enough.

First thing I wanted to do in this episode is to thank all of the guests that I've had on. I'm pretty sure I wouldn't have put out as many episodes as there were without all of your amazing stories. So thank you for sharing them, but also thank you for caring enough about the other vets who are struggling that might benefit from your story.

I want to point out a few episodes that I thought were especially impactful.
First Wes Black, who actually had two episodes during the year. Episodes 13 and 14. In the first episode he talks about his experience with exposure to the toxic burn pits, which unfortunately is not unlike the experience that many of us who deployed to the Middle East has experienced. With Wes, that exposure has led to a serious battle with cancer. It serves as a reminder to me that you're never too young to experience some major medical issues like this. We're not immune because we're under a certain age. Yet Wes is handling it with a smile on his face. That episode was truly encouraging to hear, so thank you Wes. In his second episode, Wes served in Afghanistan with my brother SGT Steven DeLuzio, and he talks about the day Steve was killed. It's not all sad though, he injects some humor throughout the episode. Although I will say if you intend on listening to it, I would not suggest doing so in the car with little kids around unless you want to answer some questions about bubble gum that you might not be ready to answer. Again, Wes Black's episodes were episode 13 and 14.
Alright, moving on.
Next, let's talk about Mark Garduno's episode about the VFW in episode 21. A lot of the vets from more recent wars in Iraq and Afghanistan have this misconception about the VFW as being an old man's club. We aren't jumping at the chance to go hang out with a bunch of people our grandparents age. But that's not really true about the VFW. Sure there are some older Vietnam, Korea, and even WWII vets who are VFW members, but it's there for everyone - our generation included. One of the things vets are missing out on after they get out of the military is that sense of belonging or camaraderie that you got when you were in the military. The VFW and other similar organizations like the American Legion has that. There are a bunch of like minded individuals who have shared similar experiences, who also are looking for that sense of belonging that many of us are looking for. Again, that episode was episode 21.
Alright, episodes 19, 20, and 22 with Edward Santos, Brad Noone, and Steve Alvarez respectively. I'm grouping those together because in those episodes those guys all talk about the activities they got involved in after getting out of the military. I also served with all three of those guys at one point or another. Santos talks about painting and photography, Noone talks about outdoor activities, and Alvarez talks about Yoga and music. I think sometimes activities are important - finding a hobby, or something you can do to take your mind off of the stuff that you might be going through. All three of these episodes talk about that type of stuff - episodes 19, 20, and 22.
Another great episode was episode 17 with Seth Shoultes. Seth was once a homeless veteran who is now a successful entrepreneur. I met Seth a few years ago at a tech conference, and first heard his story at another conference a little while later. It was mind blowing to hear his story and how determined he was to get away from the toxicity in his life. If you're having a difficult time making ends meet, can't seem to get out of toxic relationships, or any number of other issues, this episode is for you. Go give episode 17 a listen.
And episode 24 with Tony Perez. Tony's attitude towards failing is really inspiring. It's almost as if he doesn't think he can fail, which allows him to take more chances and in the end become more successful. If anyone is struggling with that self doubt, or fear of failure, give episode 24 a listen.
OK, I think I'm going to stop myself here. I think all of the guests and episodes were great, but I don't want to recap all of them. That was 8 episodes right there. That should give you some good listening material if you haven't listened to them already. But please check out the other episodes. That's what the show notes are for, so you can get an idea of whether or not the episode is something you'd be interested in listening to.

So, I've thanked the guests, but I haven't thanked you, the listener yet. Thank you! By the time this episode comes out there will be close to 3000 downloads or listens to the episodes, which is amazing to me. Please know that I watch the little ticker increase week after week, and it really makes me happy that so many people are listening. My goal is to hit 5000 by the end of the first full year, which at this rate it seems like we'll be just slightly under after 52 weeks. So, I'm going to need your help.

I'd like to ask a favor of you listeners. If you've listened to any episode that really hit home with you, or know someone who it might hit home with please give it a share so that others can listen to it too. I don't make any money off of this podcast right now, so I don't have a budget for ads. As a matter of fact, hosting this podcast costs me money with the website hosting, the audio hosting, the audio recording equipment and software. So, there isn't much left for ads to reach a bigger audience. The best way for the podcast to reach a bigger audience is if the listeners can help me out and share it with their family, friends, co-workers, or whoever else might be interested.

Another thing I'd like to ask for is suggestions for future content. Currently I have episodes scheduled out to the end of February. That leaves 13 more episodes to be recorded to round out the first full year. I then have another 30 or so spots to fill for the rest of 2020. I'd love to hear your suggestions for the types of content you'd like to hear.

I've spoken mostly to other vets about the struggles they went through and what they did to pull themselves out of it. If you'd like to hear more of that, great I'll keep doing it. I've also spoken to mental health professionals once in episode 28 with Dave Pecirep, and another coming out next week actually with Dr. Sherry Walling. They've been able to offer a lot of great advice too. Let me know, maybe more of those types of episodes would be good.

I've spoken to spouses about how they've handled deployments in episode 9 I spoke with my wife Vicki, and episode 23 with Natalie Sanders. Things we talked about in those episodes certainly play a role in the overall mental health picture as well.

I've also talked to family members who have lost soldiers either in war or to suicide after the war. In episode 10, I spoke with Chris Weir a Gold Star brother, episodes 16 and 18 I spoke with my parents Diane and Mark, both Gold Star parents, and episode 27 with Valerie Pallotta who lost her son to suicide after returning from Afghanistan.

I feel like I've covered a wide range of topics. Maybe you'd like to hear more about one particular topic or another. Maybe there's some topic I haven't covered yet, but should. Either way, let me know.

If you know of someone who would make a good guest, please encourage them to reach out to be a guest. On our website, DriveOnPodcast.com, there is a link at the top of the page that says Be A Guest. Click that and there will be a form people can fill out if they'd be interested in being a guest.

I think we're putting out some good, valuable content, but I'd rather hear from the listeners to see what type of content would be most valuable to you.

With that, I think I'll wrap up this episode. Everyone have a safe and happy new year. Don't add to the population, don't subtract from the population, stay out of the hospital, the newspaper, and jail. If you end up in jail, establish dominance quickly.

Have a happy new year!

Thanks for listening to the Drive On Podcast. If you want to check out more episodes or learn more about the show, you can visit our website, Drive OnPodcast.com we're on Facebook, Twitter, and Instagram @DriveOnPodcast.